Smith and co-workers were the first to propose the co-axial delivery of a solvent to the end of the CE separation capillary as a terminal electrolyte reservoir [see references here].

Based on this work and an already available ESI-sprayer for LC-MS engineers at Hewlett-Packard developed  a triple tube sprayer IF for CE-MS which was introduced to the market in 1995. A pictorial view of the HP/Agilent triple tube sprayer is given in the figure below. The arrows in the l.h.s. picture A, have following meanings: a. introduction of nebulising gas (N2), b. delivery of the sheath solvent, c. standard CE separation capillary (fused silica 365 µm o.d. and 25-100 µm i.d.) filled with BGE, d. SST spray needle (0.5 mm o.d., 0.4 mm i.d.)with electrical ground connection f, e. outer tube. The r.h.s. picture B shows the actual sprayer. The ribbed ring in the middle allows adjustment of the CE capillary in axial direction. The sprayer is placed in an enclosure (source) which is mounted in front of the MS inlet and thus allows to isolate the spray from environmental disturbances (see visualization on following pages). 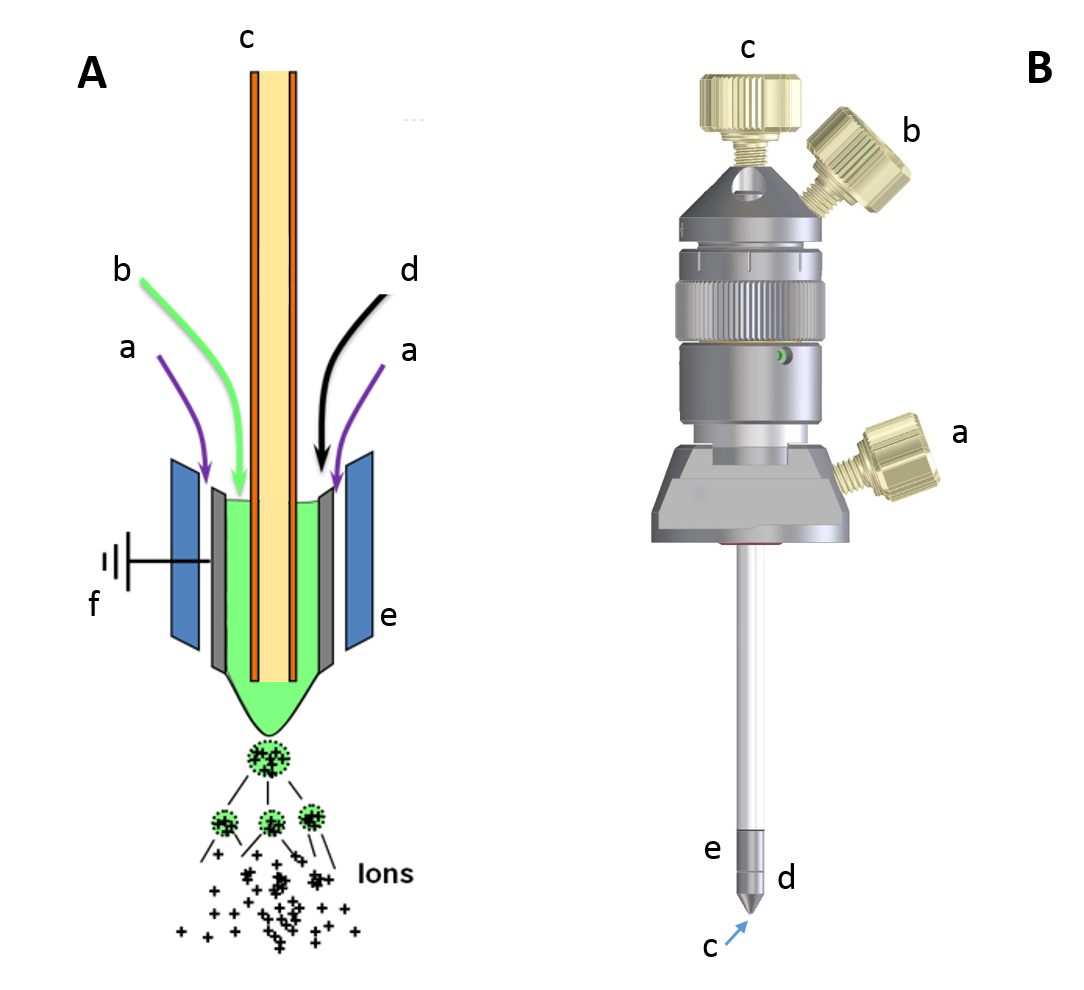 The sheath-liquid, which is added to the CE effluent at a flow-rate of typically 1 to 10 µL/min and the pneumatic assistance of spray formation by the nebulising gas, renders the spray formation independent of BGE composition and the presence and direction of the an EOF. The sheath-liquid (typically consisting of aqueous alcohol mixtures with a low percentage of a volatile acid like formic or acetic acid) dominates ESI chemistry. E.g. one can separate the analytes as anions but detect them in their polar neutral or cationic form.

Specific detail of this interface pertaining to Agilent CE-MS systems is the orientation of the spray needle orthogonal to the MS inlet capillary. In this way neutral molecules in the BGE such as cyclodextrines or big droplets that form, pass by the inlet and donot contaminate the MS inlet capillary. Bubbles caused by electrolysis in the spray needle (since it acts as the end-electrode) are easily transported out.

Over many years this interface has a proven record of robustness and stability and has been demonstrated to be very versatile in many applications [1],[2],[3],[4],[5]. Typical sensitivity (without usage of pre-concentration methods) is in the order of 0.5 - 1 µM in sample concentration or better (depending on the MS measurement method used).