NOTE: Figure and equation numbers are shown by moving over the figure or the equation. They are not shown separately.

On this page, I want to deal with the different formulations for a resolution used in HPLC and explain the subtle differences between the formulas that are used. These explanations have been taken from an article by A.S. Said (J. High-Resolution Chromatography &Chromatography Communications, (1979) 193). 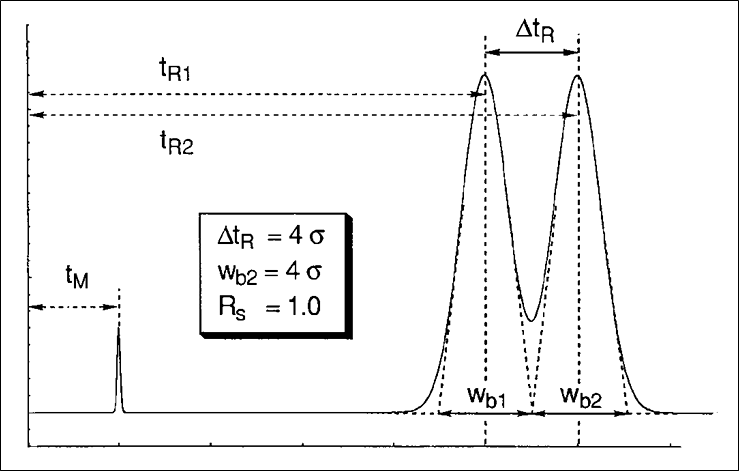 Figure 1 shows the essential parameters to measure resolution in HPLC. The formula for resolution is given below.

resulting in resolution = 1 after substituting the values given in the figure on the left.

The issue described here is that in simplification of equation 1.1, different assumptions can be made which lead to different expressions for resolution in chromatographic parameters.

In a first approach, issued by Purnell (J. Chem. Soc., (1960) 1268), it is assumed that the width of the first peak equals the width of the second peak. After some algebraic manipulations, one arrives at equation 1.2:

It is imperative to realize the difference between these two equations for the resolution of chromatographic peaks. Many mistakes are easily observed especially in non-peer reviewed journals and in promotional literature from HPLC column manufacturers. In most cases, the indices are omitted. This implies that the average plate number and average of k1 and k2 are used. In fact, however, in case the average values of N and k of the two peaks under review according to Said (JHRCCC, (1979) 193) the resolution equation changes to:

More details can be found in the publication by Prof. Pat Sandra, J. High-Resolution Chromatography, 12, 82 (1989).

In a very detailed and informative review, Prof. Joe Foley has expanded this topic further and has provided additional accurate formulations of the resolution equation (Table 1, eqn. 9-11 in J.P. Foley, Analyst 116, 1275 (1991). Foley has emphasized the assumptions that lay at the base of the different resolution equations. He eventually proposed three additional equations for the resolution of chromatographic bands eluting from the column.

Definition of the permeability of a packed bed

The definition of permeability of a packed (U)HPLC column is frequently inappropriately and incorrectly used in many popular and column manufacturer publications. This short article and the pages in the submenus are intended to clarify this area.

In prinicple, the permeability of a packed (U)HPLC column is defined as the proportionality factor in the relation between velocity of the solvent in the column and pressure drop.

Here u is the average solvent velocity, ΔP the net pressure drop over the column, η the viscosity of the solvent and L the length of the column. The proportionality factor K has the dimension m^2 .

Two questions however pop up:

This will be addressed in the following pages of this blog.

The definitions provided here are derived from two manuscripts:

In chemical engineering, the solvent velocity is defined as (lhs in equation 2.2). This is called superficial velocity.

F is the volumetric flow rate through the column and A the cross-sectional surface of the empty column. In equation 2.2, Ko is called "specific permeability". This formulation is also known as Darcy's law.

However other definitions of solvent velocity are used in this context and need to be explained.

It is defined as the velocity obtained by flow through the column between the particles. The free volume in the column available for flow is given by the left-hand equation below (equation 2.3):

The Kozeny–Carman equation is used in the field of fluid dynamics to calculate the pressure drop of a fluid flowing through a packed bed of solid particles. This equation relates the permeability of tube packed with particles to interparticle porosity, bed morphology and particle size and shape. The model replaces the space between the particles as a set of capillaries and accounts for the difference in length of the hypothetical capillaries (equation 2.8).

A superior quality HPLC column will have a chromatographic column resistance factor Φ0 around 700 which means an interparticle porosity of 0.4 and a total porosity of 0.7.

Again, it is imperative to note the differences between the solvent velocity definitions used and the column permeability derived from it. The indices are important.