The development of Agilent (Hewlett-Packard) CE-MS interface has been paralleled by development of chromatography data system and mass spectrometry software that control CE separation parameters, MS data acquisition, data processing and automation. At introduction of CE-MS in 1995, control of interface parameters, MS data acquisition and data processing was embedded in one of the first graphical users interfaces (GUI) for the G1600 series 3D High Performance Capillary Electrophoresis system. The mass spectrometer in the system was a single quadrupole mass analyzer driven by the ChemStation. The 6000 series of Agilent MS instruments introduced 2006 were driven my the MassHunter software separate from the Chemstation. Meanwhile the MassHunter software controls the Agilent CE as well resulting in two integrated CE-MS platform systems. In the figure below, import details of the Agilent CE-MS system coupled with aTOF MS are displayed. 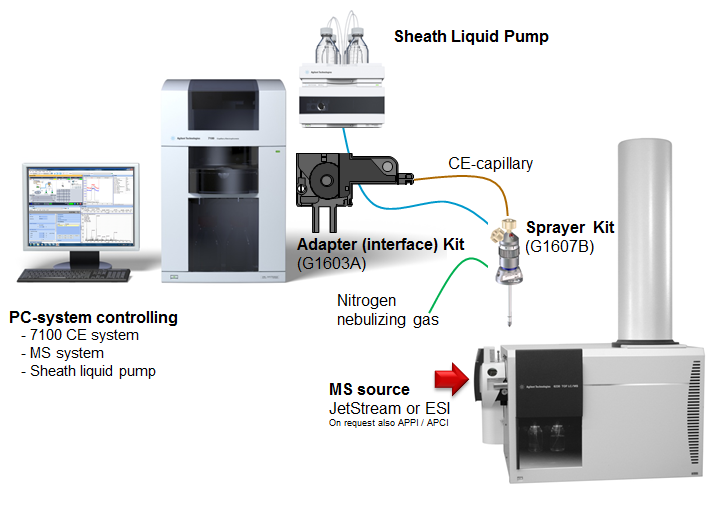 It it imperative to emphasize, that the Agilent solution for CE-MS comprises a complete system. Hardware elements are matched to purpose like the special CE-MS cassette providing outlet for the CE capillary and a sheath solvent pump for controlled delivery of the sheath solvent at 1-10 µL/min. The CE and the MS system are controlled from one PC with the MassHunter software. One essential element needs to be mentioned at this point viz. the so-called source.

It has been explained in the "CE-MS the first steps"-blog that in order to cope with the high flow rates of LC, Henion et al came up with the ion-spray concept. This concept has remained unchanged for about 20 years. Recently Agilent came up with the socalled JetStream IF for LC-MS. In here, the spray is narrowed by a curtain shield of hot nitrogen gas. As a consequence higher ion capture yield is obtained in this interface rendering this LC-MS source  mass sensitive rather than  concentration sensitive that ESI source typically are.

Work has been done at Agilent to investigate the potential of jetstream focussing of the spray has benefits in the low µL/min flow rate range of CE-MS with a triple tube interface.

The results of the study has been published by Schappler et al [1]. Though no significant benefits of the JetStream source over the standard ESI source in CE-MS were found, the main conclusion of this work is that one can use both sources without sacrificing sensitivity.

A nice video explaining the Agilent CE-MS solution can be found here. It is strongly  recommended to review in case one is contemplating to get or already is involved in CE-MS.